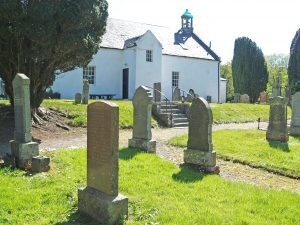 If you walk around the churchyard you will find that, as well as headstones from the last two or three centuries, there are also medieval grave slabs. There are even several stones which appear to date from early Christian tmes, before 1000AD, so this has been a religious site for a long period.

There was a chapel here following the charter granted by the Lords of the Isles in 1455, and perhaps before. It was dedicated to St. Colman-nan-eala [Columbanus], who was St. Columba’s nephew, hence the name Kilcalmonell. By 1695 it was becoming ruinous and the present building was erected about 1760. Originally there may have been a door at the eastern gable end and a large vaulted arch on the west, but these have been removed. At the eastern gable outside there is a little carved head, which traditionally represents John Knox. The present internal layout dates from alterations sponsored by Sir William McKinnon in the 19th. century

Below the archway to the vestry is said to be the grave of a soldier who returned from Culloden in 1746. When alterations to the church took place, members of his family insisted that his grave be undisturbed, and so it remains. Legend has it that he lies there with a loaded pistol and a drawn sword: “Do not disturb” should be taken seriously.

The ancient parish of Kilcalmonell stretched right across north Kintyre but in 1753 the eastern part, together with eastern Killean, became the parish of Sadell and Skipness. In the 1960s we were linked with Skipness, but that link was severed in 2003, and we are now linked with Killean and Kilchenzie and Gigha.  PS. and IMcD. 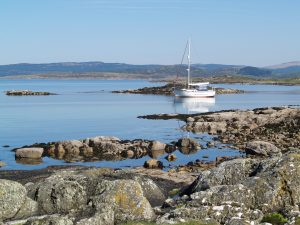